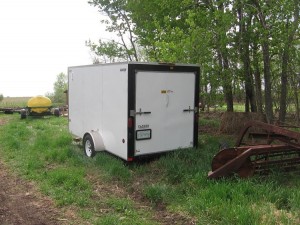 Over the past week, Peter has been in contact with a new orchard developer. ‘Garth’ is planning an orchard of 10,000 Haskap about an hour and a half from here, calling it Willow Ridge Haskap. He and Peter have spent several conversations discussing the merits of various things, and are hoping to benefit from discussions with other growers. He may be borrowing our Mechanical Planter as well. He’s coming out Saturday to help, and to watch it in action.

My experience so far with the watering issue? I think that watering fairly well for the first week of transplant establishment is pretty critical. In other words, you don’t want things dry, but I also think there is such a thing as ‘too wet’. So far, we’ve watered about every 3 days and it’s not rained a drop since we planted on May 25; the weather has been dry and sunny, averaging 22C in the daytime, with highs of 27C, and about 7C-9C at night, so the top three inches are drying out quickly. But every time I make a decision to water, I use my moisture meter, and if it’s indicating the high end of ‘moist’ at the 6″ depth, I don’t water. It almost seems as if the plants like it a little drier than wetter at his stage (10-11 days after transplanting). In retrospect, I’m almost glad we couldn’t afford the irrigation system. Of course, it’s to the benefit of irrigation equipment suppliers to convince you that you NEED one; I thought I could spend a lot of hours out there and keep my 42K that it was going to cost us. I also think that the plants will be happy enough with June rains, which are sure to fall. And in 2 years, the whole watering thing will be a non-issue yet. If we turn to an extended drought? We’ll put in a new well then…one thing about farming is that you have to be flexible every step of the way! More on watering in the soil height.

His feeling, from talking with Battle River Berries and Haskap Central, is that the hills/berms make the plants more accessible to the mechanical harvester. If you are planning a strictly U-pick operation, it probably doesn’t matter, but I think the berms would also provide for better drainage, and possibly avoid the pooling of water in Spring (and during heavy rains) which the Haskap don’t seem to like anyway. I think with that in mind, we will likely berm the Thistle Orchard. Peter is picking up the machine tomorrow, and plans to do that (yes, he’s a guinea pig, why do you ask?) in conjunction with row marking on Friday, June 7.

Alec (our son the trucker) and I will pick up the plants in Prince Albert from Haskap Central Sales storage facility while Peter is doing that. The round trip for us will take about 4 hours (with a little side trip to Timmies of course!!). The storage facility is about a 10 minute drive from Prince Albert, and Prince Albert is about an hour’s drive from here. 75 boxes with 120 plants in each box–should fit in our trailer and on the back of the truck, with a total weight of under 3000 lbs. We can most likely do it in one trip.