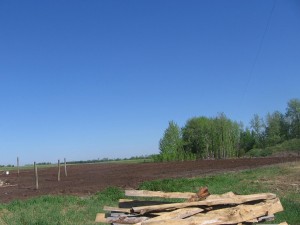 First 970 plants were planted on May 25. Here is the orchard today, May 28, 2013. It has been clear and sunny in the daytime, with temperatures of 20C (68F) in the daytime, and 9C (48 F) in the nightime. The humidity is at 33 percent. We have watered the plants  with a total of 1 gallon each in 48 hours. We will use a moisture meter to assess if they need re-watering. So far, the hand watering is not too onerous, as the deeper furrows hold the water from running all over the place. We do need a couple more hoses, as one broke, but for now, it takes about 2-3 hours a day to water. Hopefully, the well will keep up with that requirement. We have a 72′ well, and it is full to ground water level, and refills at nearly 3 gpm, so we can safely use 500 gallons at a time, finding it refilled in 6 hours. Our original intention was to put in drip irrigation, but the cost of that is not in the budget until next year, with a well alone predicted to cost 20K and the estimate for the irrigation equipment at 12K. Planting the main orchard on June 7-9 will probably be followed shortly by our usual ‘June Rains’ if the last 6 years we’ve owned this property are any indication.

Also, we’ve purchased a 320 gpm water pump and we have access to 2 dug sloughs and a natural slough near the orchard, plus we have two very large ponds to the South and West by less than 1/2 mile. There is a 500 gallon water tank we purchased some time ago, and with a diffuser and the tank on the trailer, we can water an acre in an hour. That will only be a worry and necessary if it doesn’t rain in June as per normal.

There is still a lot of moisture in the ground from the snow melt which was really late this year, not having completely melted and left the fields until the middle of May! In fact, parts of the ‘Home Acre’ are still frozen at the 8″ mark!! The Haskap don’t seem to mind that at all! I think it might have been a good thing, since they were stored dormant in boxes over the winter at -3C, and they got to ‘wake up’ just as nature intended, with a little ground water to sip! 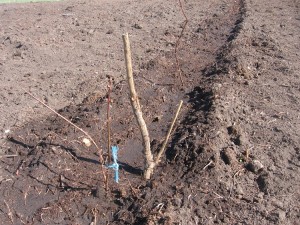 Here is the ‘benchmark’ plant. It is a Tundra cultivar, and represents the average size of the plugs we received. It is currently 12″ tall, and budding nicely on Day 3 after planting from dormant state. The stick beside it is 15″ tall, and we’ll get a proper ‘ruler’ marked in there in a few days. 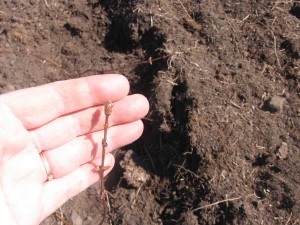 You can see the buds already leafing out in many of the plugs. Definitely signs of life in over half the plants, and we expect the remainder to show growth shortly. Most of the plugs have at least 2-8 side shoots, although several dozen are single stalked, which is great as they are very healthy and look good! The Berry Smart Blue pollenizers for the most part, seem to be the largest and have the most growth. However, they do seem a little ‘gangly’ to me, although that’s likely their nature. 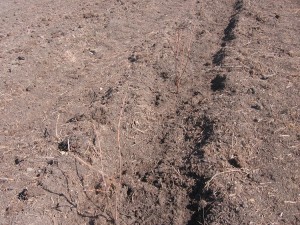 Here are two very vigorous plants, looking more like 2-year than 1-year. These are some sample Indigo Gem. 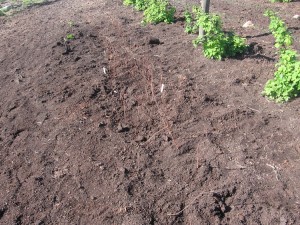 We had 47 Berry Smart Blue pollenizers left to nursery until we plant the main orchard on June 7-9, 2013. They will be transplanted there, but for now, they are quite happy keeping company with the raspberries and glad to be out of the boxes! We also have 10 Indigo Gem nesting here, to be used at replacements in the home acre. Our ratio of plants to pollenizers is 4:1. That might be more than needed, but that was the recommendation we got last year.

This entry was posted in Plants. Bookmark the permalink.