Bee & Thistle is owned by Peter and Margie MacInnis–part of ‘Clan MacInnes’.

The thistle and bee story
At the time of Alexander II, King of Scotland, early in the 13th century the Morvern area was under siege from the Norwegians who were plundering the Western Highlands. Knowing a landing was imminent, the Chief of Kinlochaline was sent to a location where the enemy was expected to land. Moving at night, the Chief arrived at the location with his men. They had a long wait and lay down on the mossy banks and feel asleep. Turning over in his sleep, MacInnes touched a nest of bees and was stung. He leaped up just in time to see the enemy landing. Calling his men to battle, they took the enemy by surprise. The battle was quick and severe. The Vikings, knowing that defeat was to be theirs, tried to fee to their ships. MacDonald’s men were waiting and made a clean sweep of the raiders.
When the fight was over, MacDonald addressed the Chief of Kinlochaline: “My blessing on you, Chieftain of Kinlochaline. Whilst MacDonald is in power, MacInnes shall be in favor.” The Chief of Kinlochaline’s answer was:

“Friendship will ever be ours, whilst the bee on the thistle is with me and with every member of the Clan MacInnes who carries the favour in his bonnet.” 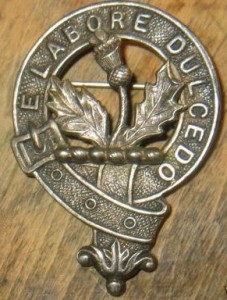