The wild bees are busy at work in the 4 established Haskap plants, and some green fruit has already set. The bees have been active over a week. The plants started blossoming on May 15, and the bees were active in them by May 21. I didn’t see a bee before that, though–still too cold I guess. I lost count after 200 berries on one plant…and more to come. The growth in these 4 plants is crazy good this year! 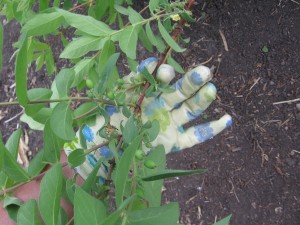 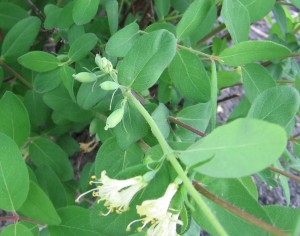 Next year, we plan to set up several bee hives in the orchard. Groot’s Honey Farm is located fairly near to us (about 1.5 hours away) and there are several apiaries in the local area as well, some of whom would be happy to set up hives here, although we are wanting to do them ourselves. Peter worked with someone who actually gave him some beekeeping supplies and some clothing and things, but we don’t have a clue how to run that, although I’m sure we can learn! The bees would definitely love the clover in the field and in the orchard! We’ve also been doing some extensive reading on Native Bees and how to provide nesting and cover sites for them. We have quite a few of them in evidence in the third week of May, so that might be a really viable alternative. I like the idea of Native Bees working the Haskap. They really are quite efficient, and my research and reading on them suggests they are a LOT more efficient than installed purchased beehives!

The plan is to plant Dwarf Dutch Clover between the rows in a 6 foot strip, and use a flax shredded straw mulch on the plants themselves. Our neighbour has a straw shredder and we are considering using that. We have a real aversion to plastic mulch and won’t use it. I know a lot of growers are using it, with different success rates, but my feeling is that it encourages roots to grow closer to the surface, which you don’t want. I hate plastic on the ground, too. Just goes against the grain for me.

One issue for us might be the ground squirrels and voles that would find the straw quite to their liking for winter warmth, but they also like clover, and might hang out there instead. There are quite a few voles active in that area of the quarter-section, and they tend to chew on nice new wood. I don’t know if setting up traps for them is a feasible thing to do or not. So we might consider doing some ‘test rows’ this winter, and see how it goes next year, rather than risk the whole orchard. Maybe 1/3 in straw with clover, 1/3 in straw with no clover (kept cultivated and black), and 1/3 in nothing at all. We’ll see what others have to say about what they are doing. Wood chips are also a consideration, and may be fairly accessible to us since Peter has worked at the Mill in Big River and might have an ‘in road’ to accessing them. I have done quite a bit of reading on the merits of wood chips versus other types of mulches from some different research projects done in the past 10 years, and it’s interesting to compare the conclusions. Maybe we’ll make our own conclusions, and do a couple of ‘test’ plots of our own.

The Home Acre which we planted on May 25, is really coming along. It’s been 6 days since planting, and I am seeing green leaves and buds on over 98 percent of plants.

Perhaps 2/100 may not survive, but one thing about Haskap? They aren’t dead until they haven’t shown life for 2 years. I was digging up some dirt to use for a flower bed from near the place we had set the plugs as we were thawing them. That’s SIX days ago—and I found one lonely plant with a dried out root system having been in the sun for 6 days..that was left behind! I believe it will come back to life, since (surprisingly, or maybe not so surprisingly) I am seeing green buds on the tips of it. So I planted it in the Nursery Bed and gave it a good dose of water and a little extra bone meal around the roots. I’ll go out and get photos of that plant later today:
Survival of the Fittest? I think so!! This plant might even surpass its neighbours. 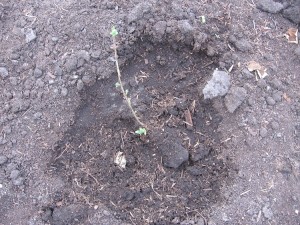 Photo of the greening up ones throughout the orchard 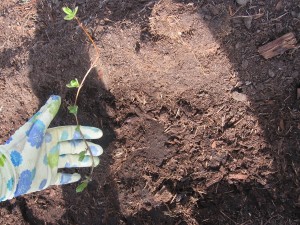 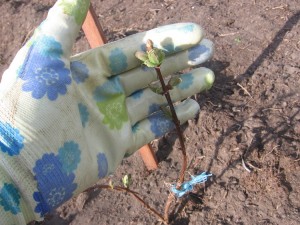 So far, all the plants in the Home Acre orchard have gotten two waterings. There is plenty of moisture at the 6″ mark, which would be where the bottom of the roots is located. I’m still working with a hose and hose extensions, and doing this furrow irrigation method, which takes me about 3 hours for the whole acre. It will go faster once Peter sets up the new pump and diffuser, and we can water from the trailer. I suppose we’ll be able to water an acre in an hour, which won’t be too bad. There is no rain predicted to fall now until Thursday, June 6!! We haven’t had any rain in any significant watering amount in 2 weeks or more.

I dug down and no longer am finding frost at the 8″ mark, and visited the North Orchard, and dug down there as well, and I’m no longer finding frost. We have cultivated this to ‘black’ several times, and we’ll make one more row pass on it on June 6th, preparatory to planting June 7-9. 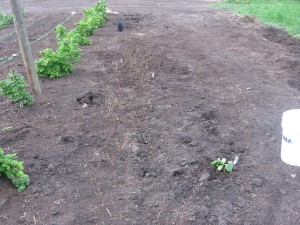 And this is a view of the Home Acre and the family garden plot, which is happily germinating.

Last season, I never bought a vegetable until early May (except for salad greens). I was able to freeze (peas, broad beans, beans, carrots, pureed zucchini, corn, cabbage, turnip, broccoli, cauliflower) and cold cellar enough vegetables (onions, cabbage, turnip, potatoes) to have them all winter, and I also gave some away to our son and some neighbours. I am on my last few jars of strawberry, rhubarb, and raspberry jam, though. I also canned zucchini, pickles, relish, chutney, ‘chow’, salsa, and tomatoes. The strawberries should be ripe in about 3 or 4 weeks, and I still have 5 quart bags of them in the freezer along with several bags of rhubarb. We are currently eating salad from the garden (onion tops and romaine lettuce) and the spinach and swiss chard should be ready for picking in 2 weeks. I am eating rhubarb, and have been all week. Must make some rhubarb jelly this weekend! 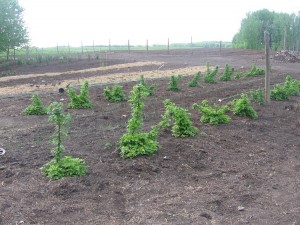