Shelter Belts–Wind and Snow Breaks, and other interesting things 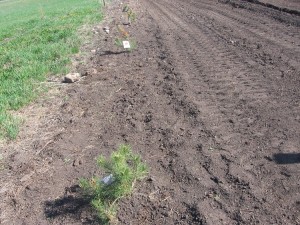 We are exploring the merits of various shelterbelts and windbreaks. For now, neither of the existing orchards has a windbreak planted by us, but the larger orchard which we will plant on June 8 has a natural tree line to the North and West; natural ridge of land to the South West of the orchard protects it somewhat. The remaining windbreak will be needed on the East and South East sides. So far, we’ve been in contact with the Shelterbelt program in Indian Head, and although this is their last year offering trees and shrubs, we were too late to be put on the list. They did let us know that we could call and reserve any ‘leftovers’ on June 3, and they feel we will still find plenty to our liking. Ideally, we would shelterbelt at least 3500 total feet, going up the middle of the orchard as well as planting on the ridge side, the South, and South West sides. If this isn’t feasible, we will consider purchasing shelterbelt trees and shrubs commercially.

There is a short row (60 feet) of Mountain Pine planted on the West side of the Home Acre; they will not grow fast enough to be useful, but they will be pretty in 10 years 🙂 The Home Acre also has natural trees on the other 3 sides, so the biggest worry is the West exposure coming from the pasture/hayfield; the winds from the West can get pretty intense at times. In the past 2 years, we’ve twice had a plow wind come through there during the unstable weather in July. Plow Wind: A term used in the midwestern United States (and Canada) to describe strong, straight-line winds associated with squall lines and thunderstorms; resulting damage is usually confined to narrow zones like that caused by tornadoes; however, the winds are all in one direction. Also spelled plough wind. Also known as derecho. from
McGraw-Hill Science & Technology Dictionary

This Fall, we will likely install a windbreak fence until the shelterbelt trees do some growing! Probably two; one half way across the 14 rows we have planted there. We have significant investment in a pile of lumber we purchased two years ago, which includes quite a few stacks of slab-type fencing perfect for this job! Now all is needed is a little elbow grease and some time in the Fall amidst hunting and bear guiding activities 🙂

Today it was 26C in the orchard, and I measured the moisture levels in the ground, and decided not to water at all today. There is adequate moisture from 1″ to 7″ in the orchard and I don’t want to risk over-watering either. There is some new budding on many of the plugs and all in all, it’s looking like a happy place. For some reason, I thought I might play some classical music and set up speakers in the orchard. We used to play the radio in the barn for the dairy cows and it seemed to help them relax and produce (let-down) more milk, so one never knows how plants feel….can’t hurt to be nice to them!

So I spent the morning weeding my regular garden and checking out the 4 Haskap that I had planted 2 years ago in my main veggie garden. They are absolutely growing like mad, and like where they are. Although both the pollenizers had some mouse damage, and I needed to prune out some dead wood, that actually seems to have stimulated so much new growth, I can see pruning again after fruiting. I counted over 400 pairs of flowers on the larger Borealis, and about 80 pairs each on the Berry Blue. The smaller Borealis was stepped on by a cow last year, and has taken some time to recover…I suppose were I stepped on by a cow, I might not feel like growing much the following year, either. The neighbour apologized and offered to make it up to me, but I assured him that once we get our 10,000 plants in place, I doubt I’ll miss one little Borealis. But I did baby it a little over the fall and winter, and fed it a little extra bone meal this Spring. Last year I had 12 berries from the larger Borealis, and the day I decided to go out and eat them–the birds beat me to it. And I’d JUST netted the strawberries. I got 100 lbs of strawberries, and nary a Haskap, but I think my lesson has been learned. This year, I’ll net the Haskap on the 6th of June. We have 4000 feet of bale netting that might come in handy, and was useful for the strawberries and raspberries last year.

Photos of the larger Borealis–it’s about 4 feet tall and 3.5 feet wide:

3 years old–purchased at Canadian Tire Hardware–origin unknown (this was in 2011, which was the first we’d heard of them. Peter was thinking of planting Saskatoons, and a friend of his said ‘WHY NOT HASKAP?’ and right after that, he went to Haskap Days 2011 and came home more excited about a new project than I’d seen him in many many years—so we phoned Curtis at Haskap Central and requested 10,000 plants to be started for us. He is SO. ENTHUSIASTIC. it’s positively contagious. People thought (and still think) we were nuts, but you know, life is short and you should not ignore these dreams too long, or you’ll never try anything new!.

Photo of the smaller Borealis–which was injured by a cow hoof–it’s right behind the Berry Blue: 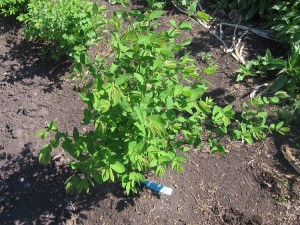 Some other interesting things:

After Haskap Days in 2011 (Margie was ill that week, so Peter attended alone), and having been introduced to the Romance Series of dwarf sour Cherries: in 2004, the Romance series of dwarf sour cherries was released. These include ‘Juliet’, ‘Romeo’, ‘Cupid’, ‘Valentine’, and ‘Crimson Passion’ by Dr. Bors at the Univ of SK and Peter and I thought it would be fun to purchase 3 or 4 plants. In 2011, we purchased this lovely CUPID Cherry, and planted it with great care, some purchased potting soil mix (and lots of horse manure from across the road) in a large hole in our front yard.
Here is the CUPID Cherry on May 29, 2013. It is a little behind the CARMINE JEWEL (not in the Romance Series, but released as a dwarf sour cherry in 1999) Cherry plants blossoming, just really getting going this week. It is nearly 4 feet tall, and I think it is 3 years old, possibly 4. It was not very big when we got it in 2011, maybe 18 inches tall. 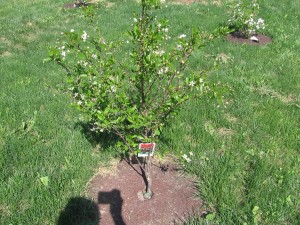 The Carmines have been blossoming and keeping wild bees and these little beautiful blue butterflies/moths? busy for a week. Every time I go out there, something is feeding on those flowers, so I’m hoping there is lots of pollinating going on out there! I hope to get a photo of one of those pretty blue butterflies, so someone can identify it for me. If you know what they are, let me know. Sky blue, very small (less than an inch, maybe 3/4 inch wings). The Carmines are all about 2 feet tall, and probably in their third year. Of course, with a purchase from the Hardware, one can never be certain how old the plants are.

And here is a photo of 3 of them, the Cupid in the front, and the two Carmine Jewel in the back. There is a third Carmine to the left, but it’s not in the photo. I can dream of cherry pie, though. Maybe I’ll be able to make one this year. Last year, I had about 20 cherries and ate them directly from the trees 🙂 They were very good! Peter was at work, and he was a little disappointed, so I won’t be so greedy this year. 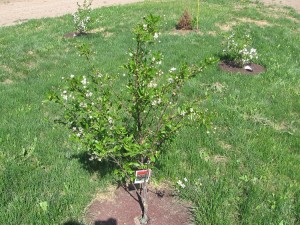